When I Call By Bright Edeh 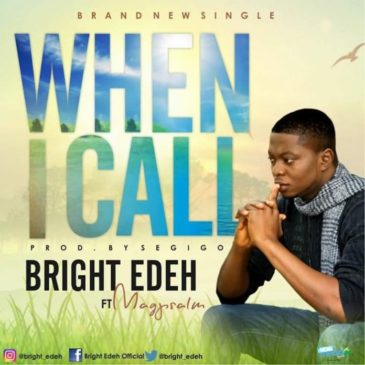 His ministry in music and as a career started 2013 after which He recorded his first singles “divine surprise” and “No one like you” 2013 respectively.

In 2017 He released another single, WHEN I CALL which was inspired by God .

This song When I Call came through at a very tough time of his life when He was battling with Ulcer which affected His vocal box to the extent He was advised by a Doctor to quit singing else It may lead to a major Operation/serious health problem. At this point all hope was lost but God came through for him.

Bright Edeh has been nominated for and won several awards right from his University Days.

He has been consistent and efficient over the years.
There is a different between a melodious voice and a spiritual sound, and in Bright Edeh the distinction is made clear.

When I Call By Bright Edeh

Oh how wonderful it is,
Jesus promised He’ll take care of me. X2

I don’t need to worry about the things I heard ,
All I need to do it to give thanks ,
And believe in what He says!

Bridge
For His love will never fail!
His mercy will always prevail.
He’s taken care of everything I am, and will ever be ,
He paid my dept on the cross!!

All: when I call on him He’s always there.

This site uses Akismet to reduce spam. Learn how your comment data is processed.

© 2022 by bring the pixel. Remember to change this